Saturday, June 22, the Oregon GOP held a rally in support of the state senator’s walkout and opposition of HB2020–a bill to cap the state’s greenhouse gas emissions.

The event fell through due to a few radicals who threatened house committee with violence; prompting the state police calling the protesters a “militia group.”

At the event, the protesters were calm and respectful to those who showed up to Protest. Gordon Hieronimus describes the bill as a “cap and trade bill that will force, loggers, in particular, to buy new equipment to meet the DEQ (Oregon Department of Environmental Quality) standards…forcing them to spend money they don’t have to stay in business; that supports a lot of families and communities.”

Another part of the HB2020 that is being voiced against is the emergency clause that the Democrats seem to be putting on every bill they have… By putting the emergency clause on the bill, it stops it from being referred to the people’s vote and that’s wrong. A sub anger that’s going on with what’s happening in the senate right now, is the Republicans don’t have a voice and they’re not being heard, so they walked off (emphasis) the job in a protest  for not being heard, and Kate Brown—the governor—has sent the armed police department after them and is fining them $500 a day. Now I can see in the rules that they operate the senate in that she can send the police out to encourage them to come back, but I have yet to find a spot in any of the rules that allows her to fine them $500 a day… From there, it’s a matter of opinion, the rules and regulations that this is HB2020 are absurd. Because, big companies and corporations are going be able to buy pollution dollars that they can spend to counteract the pollution that they don’t have to curve as opposed to the truck drivers; who have to buy new equipment.

Saturday came and went, and while the protest had a few people to show up, it was still a success in terms of it getting people sparked despite launching off at a bad start. Sunday, protestors of the “Occupy the Senate” rally filled the front of the Capital to watch and make their voices heard.

After prayer and welcoming of the people who came, everyone waited to be let into the building and started singing Star-spangled Banner and God Bless America in Unison.

A representative for Oregon’s Farm Working Union, Martha Sonata, spoke at an event to get the Republican Senators back in office on Tuesday to help people become more aware of the concerns about “a program to help our farmers move into cleaner equipment.”

We heard their concerns; they were coming into our capital, saying that this will raise diesel prices for their farms. So, we heard those concerns and said ‘you know what, we will include these programs to help you move into cleaner energy equipment’ and therefore improve the lives of our farmworkers who are on a day-to-day breathing all these diesel on the farms, and it creates a win-win for both the farm workers and farmers.

Governor Brown and other senators working on the bill even came out to congratulate the attendees for showing determination and strength. Throughout both events, both parties were kind and respectful and never showed any signs of any “violent militia” during the duration of the event. 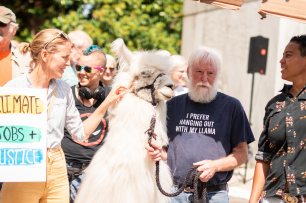 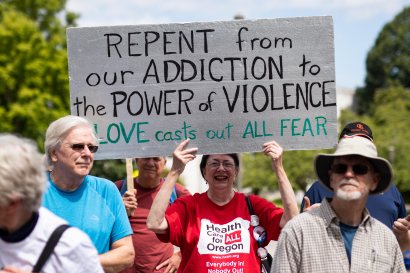 Donate below to help me continue my work to become a great photojournalist in Salem, Oregon. You can also visit the store to donate monthly or purchase merchandise.